Half of the world’s steel production and all of its cement is used for construction, which therefore accounts for around a third (Figure) of all industrial emissions and has great influence over our total demand for material production. Most of this material is used in commercial construction and infrastructure projects, so that has been the focus of our work rather than the brick built houses in which most of us live in the UK. The demand for materials in construction is driven by the rate at which we expand our total stock of buildings, the rate at which we replace them and the choices made by clients, architects and structural designers about the selection and use of materials in construction. These are therefore the areas in which demand for materials can be influenced.

In steel framed buildings, most of the steel is used in the horizontal beams – the vertical columns typically require less than 10% of the material in the building. These beams, familiar from walking past any building site, have a cross-section like a capital “I” – I-beams – and are made with aconstant depth. However they shouldn’t really have a constant depth: a beam’s tendency to bend is greatest at its centre, and it should therefore be deeper here (Figure). If these steel I-beams had variable depth, they could be a third lighter without the users of the building noticing. However, it is cheaper to make constant depth beams – typically by rolling them out in long lines – and it would cost more to use less steel so the construction industry has little motivation to change. Surprisingly, though, when we started to look at the designs of buildings with constant depth beams, we found that even ignoring this opportunity for optimisation, designers are typically over-specifying the amount of steel in the building by 30-40%. There are cost savings from using fewer variants of beam in a building – for example through allowing use of many identical joints – but the main driver of over-specification seems to be an unjustified conservatism. Designers are concerned that clients will change the specification of their building at a late stage, so build in extra capacity “just in case” even though none of the designers we spoke to had ever been required to use this surplus. 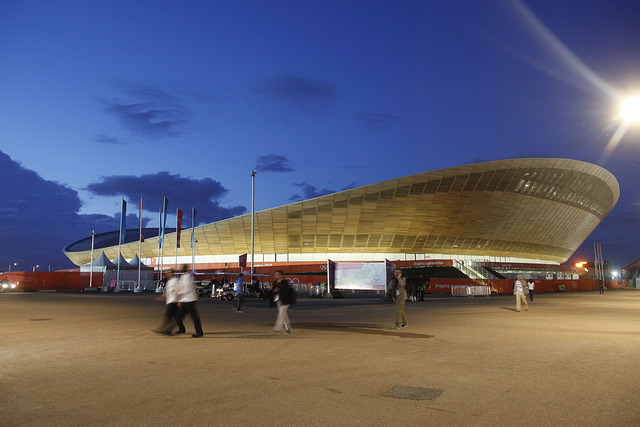 When clients insist on having lightweight efficient buildings, designers know what to do and in a study of two buildings at the London Olympics we found that a simple change in the first line of the “brief” for the Velodrome – that it should be a lightweight building – led to a saving of 50% of the material used in a different building whose brief instead began with the specification of a “signature roof.” This suggests that avoiding over-design – designing for purpose not surplus – is not a technical challenge, and may involve little if any additional cost, but will occur when clients request it. We’re therefore now working on a guide for the clients of commercial buildings to assist in specifying their building in such a way to avoid over-use of materials. The minimum material requirements for commercial buildings in the UK are defined by the Eurocodes. We analysed 23 recent buildings in London, and found that on average only 50% of the steel in their beams was utilised in meeting the standards. This suggests that if we met the Eurocode requirements rather than exceeding them, and maintained buildings for their design life of 100 years rather than the current average of 40, we could cut the embodied emissions of commercial buildings in the UK by 80% - the target set by the 2008 Climate Change Act (Figure). Buildings account for a third of industrial carbon emissions Average utilization is below 50% of their capacity due to ‘rationalization’—providing extra material to reduce labour costs.