To a first approximation, all modes of transport lead to approximately the same greenhouse emissions for each kilogramme-kilometre (see Figure). This unfamiliar unit is important – the energy required to move people and things, and the consequent emissions is a function of two main variables – the weight and the distance, and of course the weight includes the weight of the vehicle.

If we look at a pie chart (Figure) of all emissions arising from transport the car is the dominant vehicle, yet when we look at the history of fuel consumption in cars, we appear to have made very little progress in the past fifty years. We already know that the engines are designed with maximum efficiency in converting fuel to mechanical power, and this efficiency has improved dramatically since the 1950’s, motivated among other things by (male) enthusiasm for rushing around tracks in racing cars. The reason for this is that we’ve chosen to use this expansion in engine efficiency to drive larger cars (the most attractive peacock has the biggest tail feathers) with greater acceleration (due to men’s ignorance of what women want.) For example, in the late 1970’s the two oil shocks that created fear of international shortage drove American car manufacturers to reduce the weight of new cars by a third, and increase their fuel efficiency by 50%. However, since 1980, they have instead increased the weight of the vehicle again, increased its frontal area, and increased its acceleration, with no further improvement in fuel consumption.

If we take a look at new cars on sale in the UK today, and plot them on a graph of fuel consumption against weight (Figure), it’s obvious that fuel efficient cars are lighter (and therefore smaller.) We know how to make fantastically fuel efficient cars: the world record PAC II car achieved 10,000 miles per gallon (by being very light, very small and travelling slowly),  and with just two modifications, an entrant in the Shell eco-marathon achieved 160 mpg in a Lotus 7 (a car that’s already small and light). 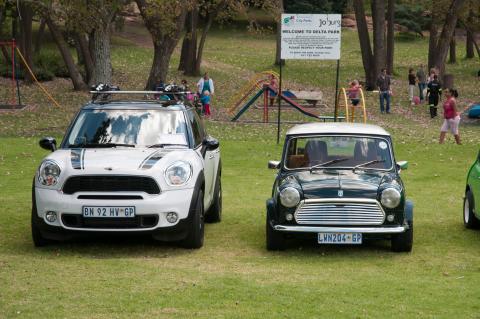 Current policy in the European Union is promoting electric cars, but the graphs here show that this is not the right priority. We don’t currently have excess low carbon electricity, so shifting to electric cars charged of today’s national grid, there is only a small saving in emissions in use – perhaps 20-30% at most – and the energy cost of production is probably increased, when allowing for the complexity of producing and disposing of the batteries.  Instead, if we focus firstly on reducing the weight of the vehicles – which reduces emissions however they’re powered – and only then on converting to electric transmissions, we would have a much better strategy (Figure).

We ensure that our climate migigation research can have the maximum impact by working closely with industry partners in the automotive industry. To find out more, or to get involved, get in touch.