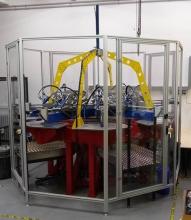 In folding-shearing, the goal is to form a sheet metal part comprised of  shrink corners such as a square-based cup. A shrink corner is a section of a sheet metal part in which material accumulates during plastic deformation. To avoid wrinkling and tearing in such an operation, a balance between tension and compression must be achieved. In the process, the corner is formed by folding followed by shearing. In the shearing step, a sliding horseshoe-shaped die passes over the folded sheet. This leads to circumferential compression and radial tension, which is favourable to keep the thickness of the part unchanged. Unlike deep-drawing, the straight flange is deformed by pure bending. In folding-shearing the undeformed region does not need to change shape, and so it is much easier to avoid wrinkling without causing cracking.

On average, the world’s automotive manufacturers scrap half the sheet metal they purchase, mainly when trimming components after deep-drawing. This waste arises mainly from the use of material in the blank-holder. This extra material is currently essential for managing the process window between wrinkling and tearing failures in deep-drawing. The folding-shearing process is an attempt to form deep-drawn shapes without a blank-holder but at comparable speed. This will result in very significant material savings while still delivering a high turnover.

Two precursor machines have been built to study the mechanics of the folding-shearing process. Experimental and numerical research aims at understanding the forces involved and analysing the modes of failure. The third machine is going to realise the full process concept, with the aim of producing square sheet metal boxes. From there, a full investigation of the process limits will be required, to test the potential of the technique to form a variety of sheet metal parts with no scrap.

History of the machine

The folding-shearing machine was designed and built by former research associate Dr Adam Nagy and by current senior research associate Dr Christopher Cleaver, in collaboration with Coventry’s Manufacturing Technology Centre (MTC). The machine has not been commissioned yet, but two precursor machines have been operational since 2018. A patent for the process is currently pending. Something to note is the clear aesthetic improvement over previous machines built in the group, with the colourful painting of the structural frame.