One way to make a bulk metal part with a complex shape is to take a block of metal and cut away material until the target shape is obtained. This is a subtractive process and leads to large amounts of waste. A more intelligent way is to join together simple components to make a complex part: in this way, waste is avoided.

However, joining metal components typically requires melting part of them. This alters the mechanical properties and often yields a weld with poor strength. Therefore, research in the Use Less Group in this field is aimed at investigating and developing solid bonding techniques, which use heat and pressure to form the weld without melting the metal.

Former PhD student Dr Daniel Cooper has investigated solid state welding of aluminium in the context of upcycling aluminium scrap without melting it. Former PhD student Dr José Azevedo has investigated the use of steel metal powder as a filler which helps two pieces of solid material join together. José’s PhD on this topic was sponsored by Tata Steel UK.

The challenge is to develop a process that leads to good mechanical properties of the weld and is fast enough to be swiftly integrated in existing supply chain operations. If successful, such a process could challenge machining as the main technique to make complex-shaped 3D metal parts. 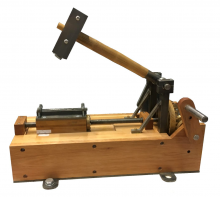 The year 2019 marked 500 years since the death of Leonardo da Vinci, and yet many of his ideas and inventions remain unexplored. That year, Max Medhurst, a 4th year engineering undergraduate supervised by Prof Julian Allwood, investigated Leonardo’s design for a machine to produce metal-working files automatically, a process performed by hand until the late 19th century.

The machine design was modified and developed using 3D CAD tools, finding solutions that da Vinci himself could have developed if he had taken his idea further. A cam mechanism was introduced, the drive gear was modified, the hammer head was separated into several components. Experiments and analysis were used to predict the energy required to form file-teeth, and hence the required hammer weight for the machine. Based on this design development, a full-scale working version of the machine was built and tested, the first time the design has ever been realised. Moreover, the first finite element simulation of file tooth cutting was developed to model the process.

The machine has been donated to the Kelham Island Museum in Sheffield (UK), which is part of the Sheffield Industrial Museums Trust.

The most energy intensive step in the supply chain of steel and aluminium products is melting the material at the start. Once liquid metal is cast into ingots, billets and sheets, subsequent cutting operations generate a lot of scrap metal. This is recycled, but has to melt again in order to become useful. What if we could cast shapes that are closer to the final product, so as to reduce the amount of scrap produced in cutting?

As part of the WellMet2050 project, former PhD student Dr Martin McBrien invented a new casting process called Tailor Blank Casting, which allows the continuous casting of metal sheets with tailored shapes. This is to avoid the yield loss associated with cutting products with complex shapes from rectangular sheets. In his PhD, Martin built a demonstration of the process that showed it was possible to continuously cast aluminium sheets with rapid variations in width. The technique uses electro-magnetic edge-dams to control the width variation of the melt in twin-roll strip casting of aluminium.

The challenge for any new process is to prove viability in a real industrial setting, and many questions remain for Tailor Blank Casting. How does the temperature profile vary across the rolls in different width change regimes?  What effect does this have on the strip?  And how is the microstructure and therefore properties of the cast strip affected across the width? The downstream processes, which may require heat treatment, hot rolling, and stamping, would all have to be developed to work in tandem with the output of the Tailor Blank Casting process.

Together with steel, cement, aluminium and plastic, paper is one of the five key engineering materials of the modern world. Developing technologies to use paper more efficiently can deliver tremendous reductions in carbon emissions.

A technology that borders science-fiction was developed in the Use Less Group at the start of the 2010s: paper unprinting. The concept is simple: removing ink from paper using a laser. Thanks to laser irradiation, printed toner evaporates without damaging the paper fibres. The implementation is a little trickier, and former PhD student and postdoc Dr David Leal Ayala performed many experiments to find the optimal conditions to unprint: the results were published in the Proceedings of the Royal Society A.

The idea was so appealing that in 2014 David founded a start-up called Reduse, based at the ideaSpace City site, which showed great potential. It was named the winner at the Venture Competition ceremony for the UK’s top climate start-ups organised by Climate-KIC (Knowledge and Innovation Community) UK, and Cambridge Enterprise supported it with a seed fund investment in 2015. The promise is that of a device that fits into commercial printers and allows uprinting paper with the same speed and ease of printing it.