Incremental sheet forming (ISF) is an umbrella term for a range of processes in which a sheet is formed incrementally by a progression of localised deformation. ISF is ideally suited for small-batches of highly customised sheet products. The wide range of potential applications includes bespoke medical implants, architectural features, specialised laboratory equipment and parts for specialist vehicles.

The key advantage of ISF over conventional sheet forming processes is that specialised dies are not required. A wide range of shapes can be achieved by moving a spherical-ended indenter according to a custom-designed numerically controlled tool path. ISF is considered a sustainable manufacturing process because a relatively small and light-weight machine can be used to form sheet metal whilst avoiding the material expense of specialised dies. In addition, ISF can be used as a local production process, avoiding long transportation distances. Re-work or re-forming of old products are further capabilities offered by ISF. Both these options require less energy than re-melting the material.

The Use Less Group has been a pioneer in the field of incremental sheet forming research.  Investigations have focused on the mechanics of Single-point and Two-point point ISF, with the goal of clarifying the deformation mechanisms at play. In particular, an important line of research has focused on the physics behind the increased forming limits achievable by the process. Moreover, the feasibility of forming sandwich panels into 3D shells (a very expensive operations to perform with conventional forming processes) has been explored and demonstrated. More recently, the effect of partially cut-out blanks to improve the accuracy of the part has been investigated.

History of the machine

The ISF machine was designed by Prof Allwood, senior engineer Neil Houghton and former PhD student Kathryn Jackson. It was built in-house by the Department of Engineering’s workshop, and it was commissioned in 2004. At the time, it was the first machine of its kind outside of Japan, where the ISF process was most widespread. Previously, research on ISF was performed using  conventional  CNC  machine  tools  with  specially  designed  non-cutting  tools. But this had two main problems: the danger of damage to the milling machine, which is generally not  designed  for high loads normal to the spindle; and the limited access to the reverse side of the workpiece. With this new machine design, high loads could be applied to the sheet with no danger of damage, and sensors could be applied to the reverse side of the workpiece to measure and correct the shape in real time. 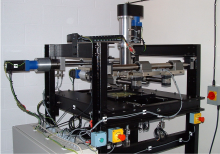