Chris Cleaver - Lord of the Rings 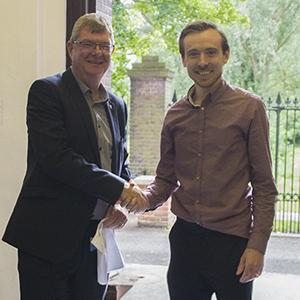 PhD student, Chris Cleaver has developed a prototype 12-axis machine for rolling of shaped metal rings. The first of its kind, this ‘Lord of the Rings’ machine was officially launched on 27 June at a function attended by all those involved, as well as senior members of the Engineering Department.

The machine is a significant achievement and the first experimental ring rolling mill commissioned in the UK since the 1970s. It cold rolls rings of up to 1m diameter in soft aluminium and lead. The novel tool arrangement allows a variety of inner and outer radial profiles to be produced for the first time without shaped tools. The project has been supported by Primetals and the EPSRC.

The build has been a major undertaking with most of the welding, milling, turning, mechanical assembly and electrical installation performed by the in house team of Engineering Department technicians. The input of this team was recognised at the launch by Chris himself, as well as Head of the Use Less Group, Professor Julian Allwood and Head of Department, Professor David Cardwell.

Professors Allwood and Cardwell, and Nick Champion of Primetals also noted what a remarkable achievement this is for a PhD student.

Professor Allwood said “I’m delighted to see this new machine join the family of novel computer controlled forming equipment in our lab.  Our last invention of flexible spinning has now been taken up commercially and a large scale industrial version is being commissioned at present. I’m confident that Chris’ new ring rolling process will generate the same level of industrial interest, as the combination of flexibility and net shaping offers reduced processing times, cheaper tooling costs, and reduced material wastage.”

After a reception in the lab, all present watched a demonstration of the machine successfully producing a ring with a stepped cross section and large reduction of wall thickness - video below.