Land Rover Defender - Stories of Use 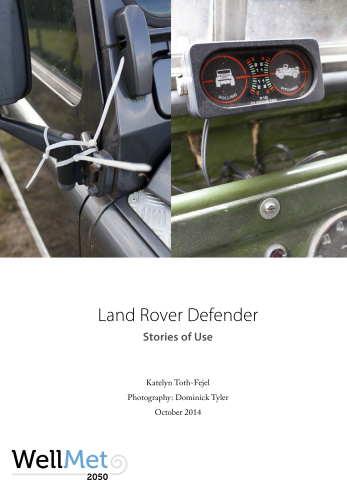 Cars may be one of the most costly household purchases, but they follow the same long term trend as other material goods, towards shorter useful lifetimes and diminished repair-ability. They are largely seen by owners as closed objects, to be bought and sold and only repaired by experts. They are disposed of when the effort or cost outweighs the perceived value of the vehicle.

This report studies the Land Rover Defender, which conversely, for many people and for many decades has continued to invite home repair, manipulation and adjustment.

The research followed an ethnographic methodology and intellectual framework developed by Professor Kate Fletcher for the Local Wisdom Project. Fletcher’s research on the ‘craft of use’ in fashion was brought to this new context of Allwood’s work in the automobile sector and the remarkable statistic that approximately 80% of all Defenders ever made are still on the road.

The stories in the report describe how Land Rover Defenders and their predecessors, the Series vehicles, through their design and the culture that surrounds them, have in many ways defied the trend toward detachment and disposability. The stories capture how Defenders allow, reward and even invite user behaviour that consequently leads to longer or alternative lives for the vehicles.